If you’re teaching or learning English, one way to keep things interesting is to look at the use of idioms in music.  One musician who certainly knows how to rock idioms is Lady Gaga.

Lady Gaga shocked the world in 2011 when she appeared at the MTV Video Music Awards wearing a dress made of meat… yuk!  Love her or loathe her, her songs can be actually very useful if you are learning English as a second language. In this article, we take a look at the idioms contained within some of Lady Gaga’s most popular songs and tell you exactly what they mean.

You know that I love you, boy

At this point I gotta choose

Nothing to lose: Someone is described as having nothing to lose if they are in a bad situation that can’t get any worse, or there is no disadvantage to attempting to achieve something.

Example: “I am going to start my own business. I really hate my current job, so I have nothing to lose.”

Since I become a shooting star

I’ve been wondering where you are

Momma told me that it would happen to me one day

Shooting star: A shooting star is someone who is rapidly rising to fame.

Fancy pants: The term fancy pants is used to describe someone who acts in a manner that is perceived to be pretentious or over elaborate.

Example: “Eric is too much of a fancy pants for me.  He is only interested in things that cost a lot of money.”

No he can’t read my poker face

Poker face: Someone is described as having a poker face if their face is expressionless and without emotion. The term poker face is mostly used when talking about the card game poker; poker players don’t want people to know what they are thinking or feeling, so they force a straight face that hides all clues.  If they are holding a hand of cards and they don’t want the other players to have any idea what type of hand they have, they try to maintain a poker face.

Example: “Steve found it hard to preserve his poker face when he was dealt three kings.” 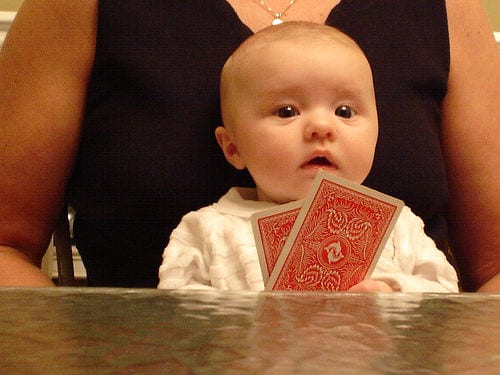 A little gambling is fun when you’re with me, I love it

Russian Roulette is not the same without a gun

Russian Roulette: Russian Roulette is a very dangerous game where a barrel gun is loaded with just one bullet.  Players take turns to aim the gun at their head and pull the trigger.  Eventually, one unlucky player will find the bullet and will be killed.

You are said to be playing Russian Roulette if you take unnecessary risks, or put yourself in a dangerous situation.

Example:  “The man was sentenced to 5 years in prison for driving under the influence of alcohol.  The judge said that he was playing Russian Roulette with other people’s lives.”

That boy is bad

He’s a wolf in disguise

But I can’t stop staring in those evil eyes

Wolf in disguise: Someone is described as being a wolf in disguise if they pretend to be nice or friendly but are really evil or dangerous.

Example: “The lawyer was a wolf in disguise.  His questions were initially friendly, but he lured me into a false sense of security.”

Yeah I am red, you are blue

Old school: If someone is considered to be old school they are very traditional in their ways and thinking.  It can be a negative term if the person described as being old school is being criticized for living in the past.

Example: “His teaching methods are just so old school. I hate his lessons.”

However, the term old school can also mean hip, cool and retro:

So starstruck, baby could you blow my heart up?

Star struck: Starstruck is used to describe someone who is totally in awe of someone else’s celebrity status.

Example: “I was so starstruck when I met Lady Gaga that I couldn’t speak.”

Looking for something crazy

Taking in circles: To talk at length without making any real sense.

Example: “I couldn’t understand a thing that she was saying.  She was talking in circles.”

Looking for more fun ways to learn idioms? Take a look at our guide to idioms about the human body.