There are 14 punctuation marks in English grammar. Master them all and… well, you’ve mastered punctuation! 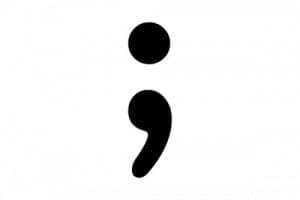 The semi-colon is an immensely useful punctuation mark for those who are looking to slam two slightly related clauses together into a single triumphant sentence.

Semi-colons are most commonly used to merge two independent clauses. For example:

There’s a crocodile in the toilet. He has a lot of hair growing out of his ears.

At present, the two sentences are separated by a full stop/period. If you were to read them aloud they would sound like this:

There’s a crocodile in the toilet. *Pause*
He has hair growing out of his ears.

If you were to insert a semi-colon in place of the full stop/period, the pause would be much shorter and the sentence would look like this:

There’s a crocodile in the toilet; he has a lot of hair growing out of his ears.

The semi-colon serves to eliminate the pause between the two independent clauses and is therefore used instead of a conjunction, such as and, yet, but, or, nor, for and so.

A semi-colon can also be used as a super-comma, to separate items in a long list. For example:

At the chocolate factory, I scoffed acid balls, they were super sour; everlasting gob stoppers, I spat mine out after an hour; curly toffees, rather yummy; and iced fancies, they made me sick. 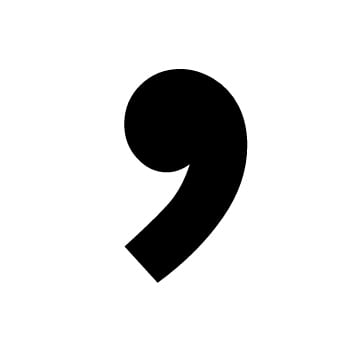 Everyone loves the comma. The problem is that quite a lot of people love it TOO MUCH. Commas are great for inserting pauses into sentences and breaking them up into manageable chunks. However, quite often, a lot of people, like us, tend to overuse them, placing them throughout a sentence, at regular intervals, until the text turns into a comma-strewn shadow of what it could have been. Did we just do that?

There are a large number of complicated rules governing comma usage (oh joy) but luckily for you, we have already covered them in great detail in our super free comma guide. There’s efficiency for you. 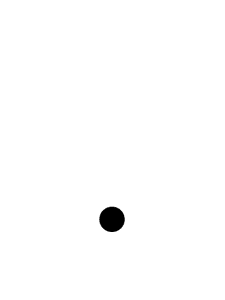 The period, or full stop as the British call it, is never going to set any hearts on fire, but it’s pretty much one of the most important punctuation marks we have. It tells you when the sentence is complete and you can take a breath. Period usage is second nature for most people and our brains don’t really even register them most of the time. We do tend to notice if they’re missing though

There are plenty of jokes that can be made regarding the name of this punctuation mark but we’re far too sophisticated for that (you’ve no idea how much restraint that took). The colon is most commonly used to introduce and can be used to introduce anything: words, phrases, lists, names or quotations. For example: 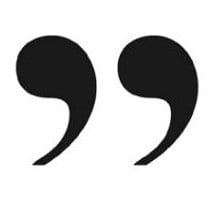 We’ve all “seen” them. They seem to show up “everywhere” these days, more often than not when they shouldn’t—like in this sentence! To stay on the safe side, quotation marks should really only be used to show that you’ve stolen the words of someone else.

Double quotation marks are used to directly and exactly quote the words of someone:

“I was absolutely amazed to find a crocodile in the bathroom brushing his teeth,” Mother said.

Single quotation marks are used to quote someone who is quoting someone else:

“I could not believe my ears when the crocodile said, ‘Can I have some privacy here?'” Mother exclaimed.

Quotation marks are not valid substitutes for italics and should not be used as such. To you and me, it’s Shakespeare’s Romeo and Juliet, NOT “Romeo and Juliet”.