Nothing is more embarrassing than a proofreading mistake. Despite the fact that everyone knows the importance of proofreading, some errors do slip through the net, leading to some very humorous situations. Here are some of the 10 best proofreading screwups of all time.

If Larry Page’s friend had been more cautious with his spelling, we may never have heard of the word Google. Rumor has it that Larry Page’s officemate, Sean Anderson, suggested the name googol (derived from a googolplex: 10^googol) as a name for the search engine. Page, who liked the name, was keen on shortening it to googol and asked Anderson to register it as a domain name. Unfortunately, Anderson researched google.com and Page registered it immediately. When they eventually discovered the error, it was too late.

In 1988, the University of Wisconsin made a massive error when they handed out over four thousand graduate diplomas with the name Wisconson typed at the top of every one. While nobody noticed the error at the time (including those who were awarded the diplomas), the error was eventually picked up six months later.

An official denied accusations that the university had failed to proofread, claiming that they had proofread all the certificates but only to verify the spelling of names and degree subjects. So that’s okay then? 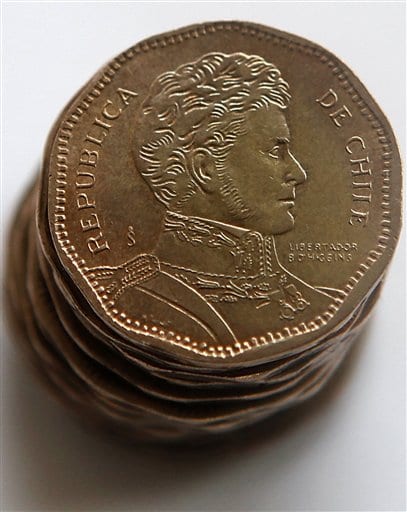 Early in 2010, a Chilean man was sacked after he authorized the production of 1.5 million 50-peso coins that spelled the country’s name “C-H-I-I-E”. Gregorio Iniguez, managing director of the Chilean mint, was kicked out after the mistake was discovered. Unfortunately, by that point it was too late, and all 1.5 million coins remain in circulation to this day.

4.  What type of democracy is this?

In 2007 administrators from the Ottawa County in Michigan were publicly humiliated as a result of a spelling error that featured on their 170,000 printed ballot papers. Instead of describing the election as a public ballot, they had inadvertently named it a pubic ballot. Luckily the mistake was corrected before it caused any embarrassing confusion, but the error did come with a $40,000 price tag. 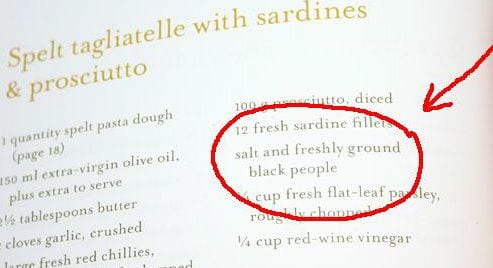 This proofreading mistake was one we just had to share. Not only did it cost the Penguin publishing company in Australia over $20,000, it also caused a PR nightmare of epic proportions. Would you believe that just one, single word was responsible for this catastrophe?

The mistake was found in Penguin’s popular publication The Pasta Bible within a recipe for tagliatelle with sardines and prosciutto. Sounds yummy. Unfortunately, however, aspiring pasta chefs were instructed to season their pasta with “salt and freshly ground black people.” Yikes! The result was an urgent recall of all published books and thousands of dollars spent on public relations activities in order to try and reassure the public that the misspelling was an unintentional proofreading mistake.

6. Lock up your wife 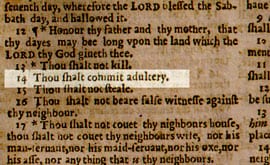 In 1631, a printer in London printed and distributed 1,000 copies of the bible. All was well until people started to discover that there was a mistake in the Ten Commandments. The word not had been omitted from the seventh commandment and worshipers were subsequently instructed to commit adultery. A very angry King Charles I fined the printers and demanded that all 1,000 copies were burned. Unfortunately, for him, 7 copies did survive and the mistake remains for all to see. 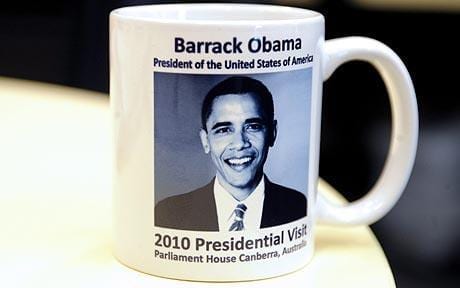 Back in June 2010, those working in the gift shop at Australia’s Parliament House were deeply embarrassed when they unpacked a delivery of mugs that had been ordered to celebrate US President Barack Obama’s visit to Australia. Staff were horrified when they realized there was a proofreading error and that their mugs welcomed “Barrack Obama” in very large letters.

The mugs, which were planned to retail at $10 each, were hastily repacked into their box and the gift shop missed out on around $2000 in lost revenue.  Parliamentary services secretary Alan Thompson said that the staff in the gift shop had learned a “valuable lesson” and that new mugs would be ordered with more attention to detail.

8. Maybe no one will notice? 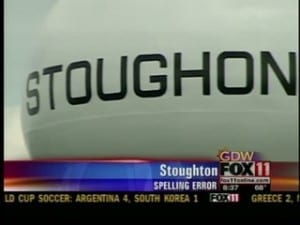 The people of the city of Stoughton were pretty amazed when they saw that their new water tower had been painted with the word Stoughon. Apparently the painter had made the mistake when sketching the letters on the tower and although he realized the letter “T” was missing after he had painted a couple of letters, he went ahead and finished the painting anyway. Luckily for the people of Stoughton the mistake was eventually fixed by the contractor free of charge. 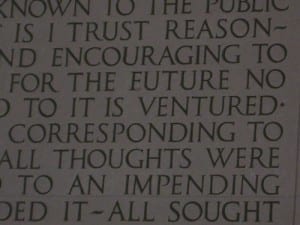 If you ever visit the Lincoln Memorial in Washington, D.C., be sure to take a careful look at Lincoln’s inaugural address, which encourages us to think about America’s past, present, and euture. Yep, euture. Rumor has it that an overzealous carver made the mistake and, although it was spotted immediately, the cost of replacing the wall was too high so the extra line was simply filled in. If you look carefully, you can still see it.

A clerical error in 2006 may have cost Italian airline Alitalia a massive $7.72 million USD. According to reports the airline mistakenly advertised a flight from Toronto to Cyprus for the cut price fee of $39 instead of $3,900. By the time the error was discovered 2,000 tickets had been sold and the airline was forced to honor the price.

Don’t make mistakes that make you look stupid and cost you vast amounts of money. Use professional proofreading services to check your important documents now.